For a year or two I’ve been a very satisfied customer of Moi, a Finnish mobile operator. This week I received an offer from Elisa, tailored specifically to Moi users. Below are the basic numbers.

Let’s go through the numbers. In the monthly fee category Elisa is the clear winner. The offer is for two years so the total savings are going to be 74,40 €. Elisa is clearly going after Moi here; Elisa’s normal monthly fee is 24,90 € and this offer is valid only for transferring numbers from Moi to Elisa.

My phone is on my home or work WiFi basically all the time, so the the data allotment doesn’t reallly matter to me.  I have never gone over Moi’s 4 GB limit. My always-on-WiFi usage also means that both companies’ 4G speed is more than sufficient for me. I consider the maximum speeds that companies advertise to be basically lies, especially when you live in the woods like I do. I ran SpeedTest over Moi at home and got around 40 Mbps. I might add more measurements to this if and when I remember and have the time.

Elisa’s calls and SMSs are clearly more expensive, but on the other hand I don’t use those much. I made a spreadsheet of my past 12 months’ phone use to get some actual numbers on this. On the average I speak on the phone for 30 minutes/month and send 7-8 texts. With those numbers, Elisa is still 2,5 € cheaper/month. Over two years that would be 60 €. So, one would think this is quite clear?

Nope. There are several things about Elisa that bug me (hopefully not too much in the “installing covert microphones” sense, though).

What’s not mentioned in the offer is that Elisa charges a 3,90 € starting free. And also 5,90 € or 6,90 € for delivering the SIM card (to home and post office, respectively). On the other hand, those can be considered covered by the 20 € S-ryhmä gift card that’s included in the offer. The Elisa subscription also accumulates S-ryhmä bonus, but with these figures that’s like cents or fractions of cents so I’m not going to include that in the calculations.

More annoyances that weren’t mentioned in the offer: Elisa’s subscription includes advertising pushed by Elisa and its partners. If you want to be removed from their advertising list, it’s going to cost you 1,00 €/month. I basically loath most kinds of advertising so this is what bugs me the most. For the record, Moi doesn’t do this kind of bullshit.

Elisa is also really agressive in pushing their services. During the chat about the phone subscription they offered Elisa Viihde, HBO and F-Secure. A free month of those is included in the offer.

A side-note: our company used to use Elisa/Saunalahti’s phone services. After we left them about 6 months ago, they have been calling me like every two weeks and sending emails about their Oma Elisa admin trainings (none of which they sent when I was actually using them). They also seem incapable of getting their billing info correct. For several months we have been getting reminders of bills we never actually received. So that might have an effect on my opinion of them.

I did end up taking the offer. It is supposed to be about 60-80 € cheaper during the next two years after all. But I’m still regretting the decision and kinda disappointed with myself: I should have paid the extra euro or two per month and stayed with the company I actually like.

I wonder what kinds of data slurping Elisa does? And if they share that data with S-ryhmä? Wouldn’t surprise me in the least.

Update 2018-02-23: I did some anecdotal tests with SpeedTest at home and at work. Elisa’s network seems really crappy where I live and work. So the only thing going for it is the special offer on the monthly cost. Otherwise I wouldn’t recommend them to anyone. 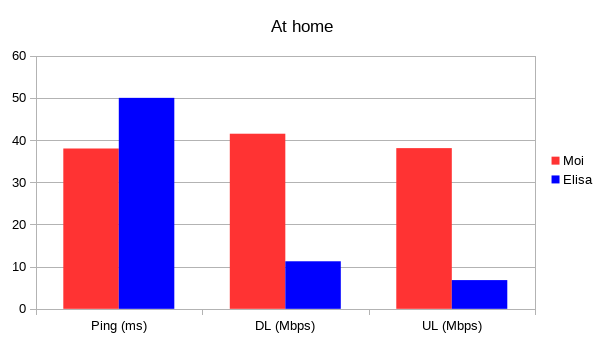 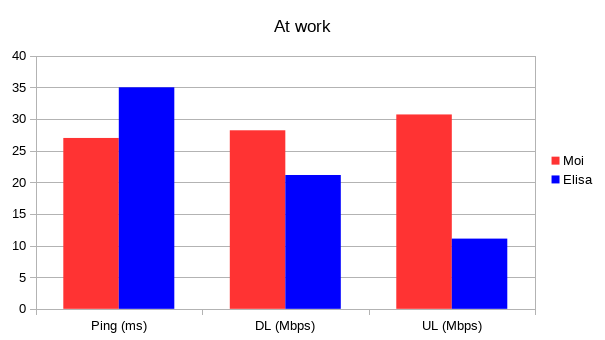